Neighbors and F/friends of all ages are invited to walk the grounds of Pendle Hill with John Gruber, a science teacher and researcher at Friends’ Central School, and Lloyd Guindon, the tender of Pendle Hill’s campus and trees for over 30 years. We will learn about the rich interconnected layers of human, animal, and plant life all around us.

John Gruber is a science teacher and researcher at Friends’ Central School. He grew up in Pennsylvania and New England. John began working at FCS in 1991. John was an environmental analyst at Abt Associates in Cambridge, MA and a science teacher in rural Zimbabwe before coming to Friends’ Central’s science department. John attended Brown University and received his AB in Environmental Studies with a focus in biology, geology, and evolution. He earned a Masters of Science in Medicinal Chemistry from the Philadelphia College of Pharmacy and Science. John is an active ecological and systematic biology researcher with particular interests in moths, bees, and fungus. 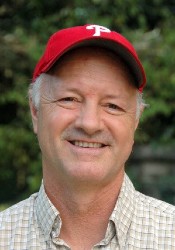 Lloyd Guindon has carefully tended the Pendle Hill grounds for over 30 years. A graduate of the Barnes Foundation’s Arboretum School, he is trained as an arborist with the International Society of Arboriculture. Lloyd’s love for the natural world was nurtured through his childhood on the dairy farm at Olney Friends School in Barnesville, Ohio. Lloyd is a lifelong Quaker and also a poet.