The origin of “Continuing Revolution.”

The Continuing Revolution annual training conference has its roots in several places. Pendle Hill, in seeking to develop young adult programming that speaks to the real needs of young adult Friends, conducted listening sessions in 2011 with young adults to find out how the Spirit was moving among us. The result yielded a request for more content rich skill-building opportunities to deepen leadership, spirituality and social justice activism. At the same time, Quaker Earthcare Witness (QEW) was looking to host a young adult conference on eco-justice and sustainability, with Emily Higgs as the coordinator. The two parallel hopes aligned perfectly and Pendle Hill, with QEW, the Pickett Endowment, Philadelphia Yearly Meeting and Willistown Monthly Meeting as strong supporters, organized and hosted a conference on the Quaker testimony of stewardship/sustainability in June 2012.

That first conference was the first of a now annual six day social justice young adult Friends conference held every June at Pendle Hill. The list of supporters has grown to include the Thomas H. and Mary Williams Shoemaker Fund, the Miles White Beneficiary Society, and many individual donors. Emily Higgs served as the Conference Coordinator from 2011 – 2015, with Katrina McQuail serving as Assistant Coordinator in 2014-15 and assuming the full Coordinator role in 2015. 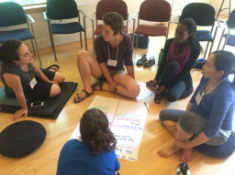 The name, Continuing Revolution, originated from a seed planted in the training program known as Called to Action in Philadelphia Yearly Meeting. Called to Action was active from 2010 – 2013, and designed a training-oriented curriculum for Friends focused on the intersection of spirit and social action. This group included Wade Wright, Ann Yasuhara, Viv Hawkins, Emily Higgs, and Michael Gagne. Michael brought the term “Continuing Rev_l_tion” to the Called to Action body, and with permission, it was brought to the Pendle Hill conferences as an expression of what we believe is possible in the intersection of our continuing commitment to social justice (revolution) and our continuing Quaker commitment to being open to the Spirit (revelation). For two years we used the title of Continuing Rev_l_tion for these conferences, shifting to Continuing Revolution in 2013-14.

The mission of the Continuing Revolution conferences is to offer a transformative, spiritually enriching and intellectually challenging program on social justice issues for young adult Friends who wish to deepen their activism, leadership and capacities as change agents in the communities in which they work.