How have Friends collaborated with and sustained the global system of White Supremacy? George Fox, the founder of the Religious Society of Friends envisioned a revolutionary religion which professes the belief that every person has a direct relationship with God. Early Friends proclaimed our capacity for spiritual wholeness comes from the seed of God planted in our hearts. What structures are preventing Friends from living into these beliefs and growing God’s seed?

Vanessa Julye is a cis-gender, heterosexual woman of African and Indigenous descent who lives and works on the traditional territory of the Lenni Lenape Nation, called “Lenapehoking.” The Lenape People lived in harmony with one another upon this territory for thousands of years. She serves as a guest speaker for many Quaker meetings, Quaker schools, Quaker and secular organizations and conferences. Vanessa served on Racial Justice Committees in her local Quaker meeting. She is working on increasing awareness of racism in the Quaker and sectarian communities. Vanessa has been recognized among Quakers as having a calling to a ministry with a concern for helping the Religious Society of Friends become a whole blessed community. She travels throughout the country and abroad, with a travel minute from Central Philadelphia Monthly Meeting, speaking on this topic and leading workshops about racism focusing on its eradication and the healing of racism’s wounds. Vanessa discusses overcoming racism in the Religious Society of Friends in several documentaries. She meets with and provides programs for BIPOC Quakers throughout the world both in-person and virtually, many of whom are isolated members of their Quaker meetings in Canada, Mexico, and the United States of America. 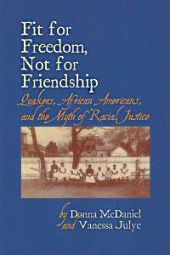 “Fit for Freedom, Not for Friendship” (Quaker Press)

Vanessa and Donna McDaniel are the authors of Fit for Freedom, Not for Friendship: Quakers, African Americans and the Myth of Racial Justice that focuses on the relationship between African American Friends and non-Friends with Quakers of European descent from the 17th through 21st Centuries. Vanessa has published numerous articles in Quaker magazines and pamphlets on Quakers and racism. She is Friends General Conference’s Director for the Committee for Nurturing Ministries focusing on the Racism and Youth Ministries Programs and staffs the Institutional Assessment Implementation Committee. Vanessa is a member of Central Philadelphia Monthly Meeting, Philadelphia Yearly Meeting, The Fellowship of Friends of African Descent, Quakers Uniting in Publications, Ujima Friends Meeting, and Ujima Friends Peace Center.

The Stephen G. Cary Memorial Lecture was endowed by Norval and Ann Reece and established in 2004 in concert with Pendle Hill’s publication of Steve Cary’s memoir, The Intrepid Quaker: One Man’s Quest for Peace.