New Year’s Eve at Pendle Hill promises to be out of this world! This concert spotlights an astro-harp presentation featuring the celestial photos and narrative of Kevin Witman accompanied by the silvery musical strands of harpist Janet Witman. Janet is known for her ability to successfully crisscross the realms of classical and Celtic harp music. A soloist with many orchestras, she was also winner of the U.S. National Scottish Harp Championship and the All-Eastern Scottish Harp Championship, which sent her to the Edinburgh Harp Festival. Kevin is a professional planetarium operator/lecturer, and his astrophotography has been viewed on the BBC and MSNBC.

Other exciting music will be provided by Dori and Jeremy Middleman (cello and French horn), Jeremy Ong (trombone), and Dr. Risa Okina (piano). This program seeks to reveal wonders of the universe, and is hosted by longtime friend of Pendle Hill, Maestro Karl Middleman. 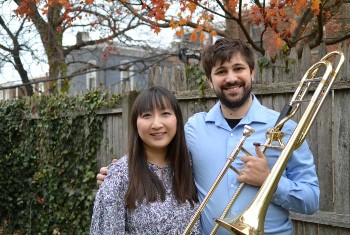 Jeremy Ong earned his Bachelors in Music Education from Indiana University South Bend. He was runner up in the 2012 IUSB concerto competition and was the winds division winner in 2011. Jeremy currently performs as a member of the Philadelphia Wind Symphony and is the current band director at Ancillae Assumpta Academy. Jeremy has performed solos with the IUSB Wind Ensemble, the IUSB Brass Choir, The Southold Wind Ensemble, The NASM Accreditation Recital, the IUSB Jass Band, and the IUSB Brass Choir.

Dr. Risa Okina is a much sought-after collaborative pianist and music theorist in the Philadelphia Area. Before moving to Philadelphia, she was a member of the Toradze Piano Studio, where she studied with the world-renowned pianist Alexander Toradze. She performed regularly at the Toradze Studio Recital series during her master’s program. Risa received her Ph.D. in Music Theory from Temple University, where she has been teaching undergraduate music theory classes in both written and aural theory. Her research interests include Sonata Theory, Schenkerian Analysis, and Hermeneutic Analysis on the music of Johannes Brahms. She holds a MM in music theory from Temple University, a MM in piano performance at Indiana University South Bend, and a baccalaureate degree from the Toho Gakuen School of Music in Japan. 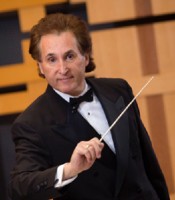 Karl Middleman is both a conductor and an educator. His presentations have been hailed for the easy way they mix scholarship with showmanship. Karl has lectured for the Philadelphia Orchestra over 50 times and has received many awards from the National Endowment for the Arts, the Pew Center for Arts and Heritage, and the Pennsylvania Council on the Arts. He teaches at Temple University and at the Chautauqua Institute.